An Ethiopian doctor has given the BBC a horrific account of how hospital patients were evacuated on a tractor and trailer, and how he hid in the woods, after conflict broke out in the northern Tigray region last month. 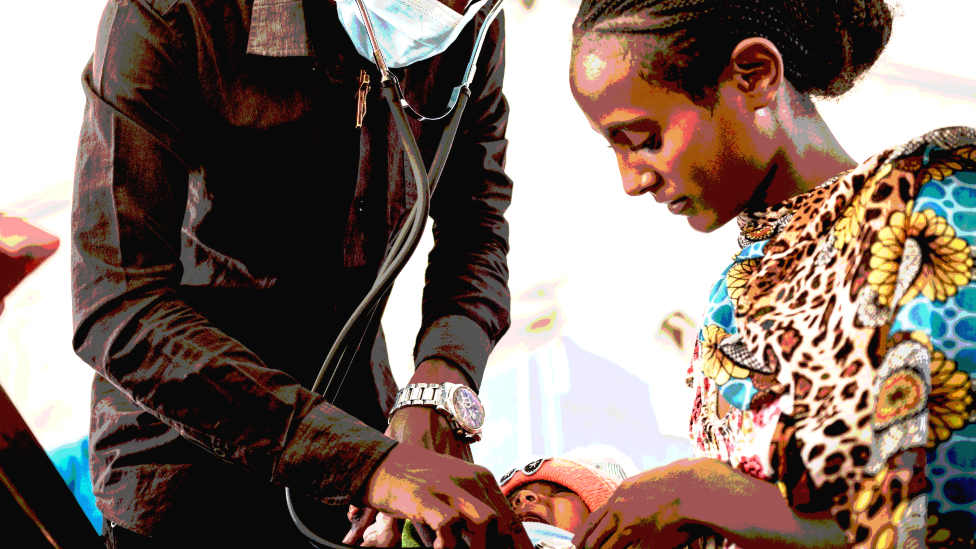 Dr Tewedros Tefera fled the agricultural hub of Humera and later the nearby town of Adebay, telling the BBC it became too dangerous to remain in either place.

A second doctor, who preferred to remain anonymous, gave a similar account, saying he gave first aid to a female patient taken on a dangerous journey by motorbike taxi with severe injuries to her stomach but does not know if she survived. They both report seeing numerous civilian deaths.

Mr Abiy said the Ethiopian military did not kill a single civilian as it fought its way to the regional capital, Mekelle, taking control of it on 28 November.

The Eritrean government has also denied getting involved in the conflict to help defeat the TPLF, despite the TPLF firing missiles into its territory.

It has been difficult to get accurate information about the conflict because of a communication blackout in the region.

Humera – which has a population of about 30,000 – was one of the first places to be affected by the conflict, with fighting starting there on 8 November.

Warning: Some people might find some of the descriptions upsetting.

There was heavy shelling. It targeted every part of Humera – market places, around the church and mosque areas and even the vicinity of the hospital compound.

On day one I know we received around 15 dead bodies and 75 wounded civilians. The shelling continued the whole afternoon.

The town was shelled from the eastern side, where the Ethiopian National Defence Force (ENDF) was, and from the northern side by Eritrea. The border from Humera to Eritrea is only about 200m [about 650ft] away so shelling was definitely coming from Eritrea also.

The next day it started early in the morning but it declined at about 11:00. We received eight bodies, and more injured people. We then decided it was not safe for our patients or for us.

We decided to leave. We took our wounded patients on a tractor lorry and we got to Adebay, a place about 30km [18 miles] from Humera. There was no shelling there but fighting was going on.

We continued our treatment of the wounded in the clinic in Adebay. Many more civilians were coming from Humera.

On the first day, we were treating them for injuries caused by the shelling, but after the government troops arrived in Humera, civilians started coming with stick marks and sharp wounds – bigger than those caused by knives.

They also said the pro-government Amhara special forces, in uniforms and with badges on their chest, and the “fanos”, who are militias with no uniforms, had arrived in Humera.

In different parts of western Tigray, the following happened:

In Adebay, we carried on treating patients for two days. The fighting then became intense, even coming close to the clinic.

We decided to send our patients on a truck to other parts of Tigray, where it was still relatively safe, while we fled on foot to the woods, about 250m away.

We hid there for two days. On the third day we decided it was not safe any more because there were more killings, more chaos, going on in Adebay. We could hear gunshots, and sometimes very noisy fights.

So we decided to flee on foot to the Sudanese border town of Hamdayet, which was about 50km from where we were. The militias followed us, intermittently, through the bushes right to the Tekeze River.

I am now at the refugee camp, I am still treating patients. I’ve got patients from different parts of Tigray – even as far as 300km from the border. People walked, seeing many dead civilians on the way.

I have patients who say they saw Eritrean forces in Tigray who committed atrocities, burning houses and destroying farmland.

All this has happened under a dark shroud, when the internet was shut, electricity cut, and the banking system closed. No-one knows what is really happening deep inside Tigray.

I have spoken the truth, based on what I have seen and heard. I hope people will send an independent body to investigate.

For two or three days before the shelling started in Humera, we were receiving casualties from federal and regional forces as well as civilians. These were from gunshots and heavy weaponry. But the numbers were not high.

That changed when the shelling started from Eritrea and the Ethiopian military. There was even an explosion in front of the hospital.

All our casualties were now civilians. On that day in my ward, we received about 200 casualties; nearly 50 of them were dead on arrival. Young men were bringing the wounded in their bajajs [tuk-tuk motorcycle taxis]. There was a shortage of beds, and some of the patients lay on the hospital floor, others outside.

Before the conflict started, we had nearly 200 patients admitted for various illness. Many of them now gave up their beds for the wounded, and helped look after them.

But as doctors we could not do much to save lives. There was no blood in the blood bank and there were too many patients. We could only do basic things. Patients died in front of our eyes. We worked until about 22:00 on that day.

Because it was not safe, some hospital staff decided to go to Adebay. Others decided to stay. I went to Adebay. We arranged transport to take some of the patients with us. They included six soldiers from the Ethiopian military.

In the morning, we started working in the clinic in Adebay. We had 10 patients who came all the way from Humera.

There was a mother who was brought by her son. She had injuries to her abdomen. She was bleeding. Her intestine was hanging from her stomach. Her son was strong, bringing her from Humera in a motorbike. I do not know whether she is still alive. I could only give her basic first aid.

We took care of patients at the clinic for three days. Then the Ethiopian military came and took away the soldiers we were treating.

The Ethiopian military was now also shooting at civilians in Adebay. We were forced to go and hide in a place near Adebay, but we used to come in the evening to treat patients in the clinic.

On the fifth day we decided it was no longer safe, and we had to go to Sudan. We left antibiotics and other medication that we brought from Humera for the two or three staff who were at the clinic in Adebay.

Some people walked for four days to get to Sudan, but I was lucky as I had a contact with a motorbike driver who took me and my wife across the border. We reached Hamdayet in one-and-a-half days.

When we got there, I saw a young man with injuries to his head and his hand cut off. He told me he was from Mai-Kadra. I gave him medicine for five days.

I have seen many people here – all Tigrayans – with serious injuries sustained during attacks in Mai-Kadra. But I lacked medical equipment to treat them. [The government-affiliated Ethiopian Human Rights Commission says some 600 people, mostly ethnic Amharas, were killed by pro-TPLF militias in Mai-Kadra.]

Now, I have moved to the Um-Rakoba refugee centre, about an eight-hour drive from Hamdayet. Here, Sudanese people come for treatment. Most of them have diarrhoea and chest infections.

We told them we will serve them but it pains me when I think of the patients back home – some of them needed oxygen every day, others needed to be treated for gunshot wounds. Imagine, they have been left to die.

The U.N. Must End the Horrors of Ethiopia’s Tigray War