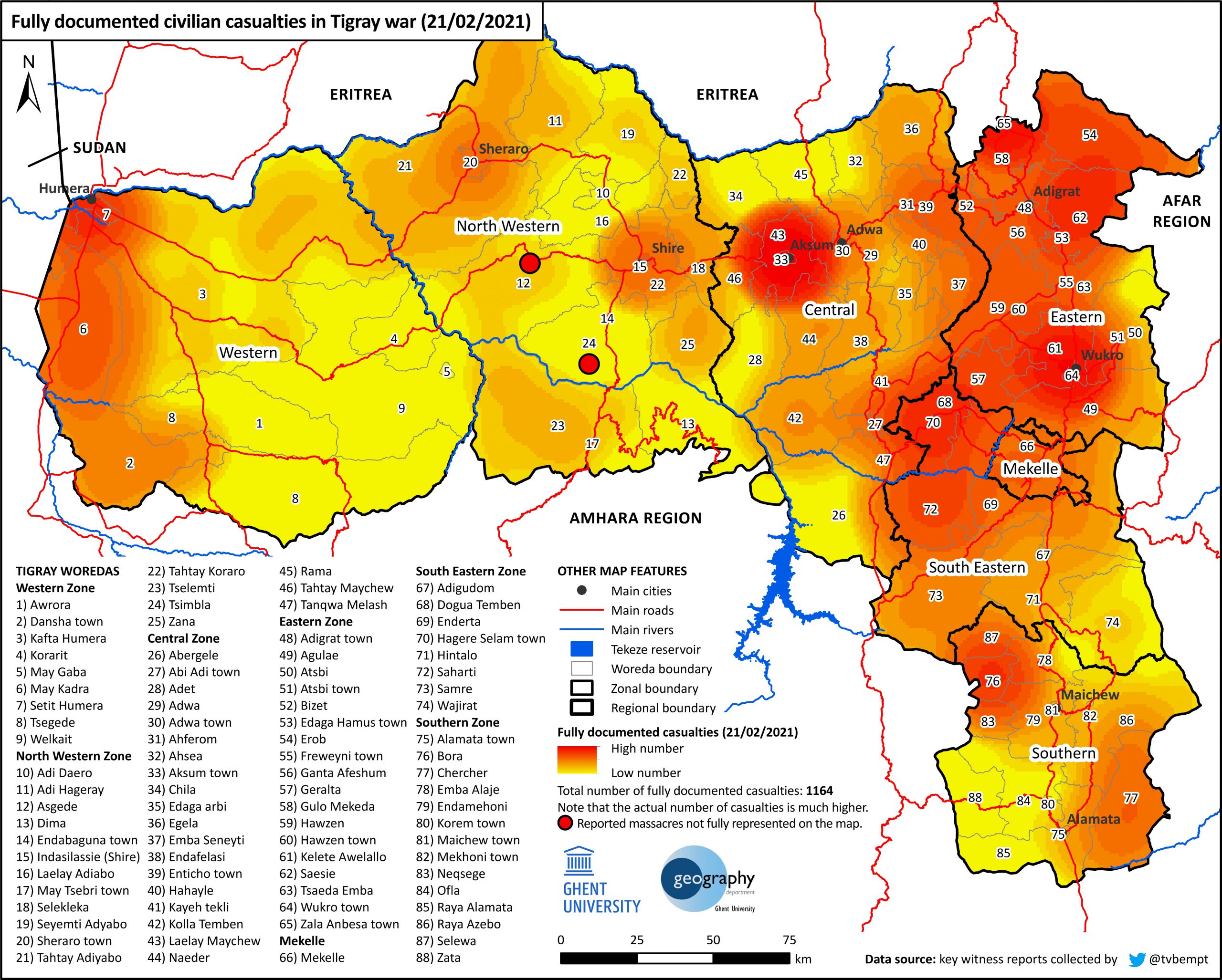 “Related to civilian damage, maximum caution was taken. In just 3 weeks of fighting, in any district, in Humera, Adi Goshu, … Aksum, …, Edaga Hamus, …. The defence forces never killed a single civilian in a single town. No soldier from any country could display better competence.” Those were the words of Ethiopian Prime Minister Abiy Ahmed in his victory speech for the federal parliament on November 30. He stressed: “Not a single civilian was killed”. The victory was counterfeit and so was the statement on no civilian casualties, sadly. Amid ongoing fighting, the number of killed soldiers is rising fast, and so is the number of civilians who are killed in the war. Just yesterday the Aksum and Edaga Hamus massacres are headlines in international media. Names of civilians who lost their lives as a result of warfare slowly surface. The communication blackout and lockdown of the region make it very hard to get verified information, so the actual number of deaths is likely much higher than the sample that we have collected so far.

Through Twitter (@tvbempt), we have collected verified identities of civilian victims of the war on Tigray. The list is populated largely from Tghat (maintained by Dr. Desta Haileselassie Hagos), but also from social media posts, media reports, advocacy group listings (for instance Irob Advocacy) and direct reports. The social media posts are mostly from family and friends who mourn the death of their loved ones, which they learnt about by telephone. Each one has been contacted to try and get a verification of the circumstances. Several advocacy groups are also documenting. It is however noted that there are families who, for various reasons, do not report loss of relatives on social media, reducing the sample of fully documented casualties. Among the families who reported the killing of their dearest, 14% have also provided a photograph.

The victims of the Hitsats (west of Shire) and Debre Abbay massacres (SSW of Shire) are poorly represented in our sample, which is probably related, in the first case to remoteness of the place, and in the second case because the victims are not locals but Eritrean refugees. Both massacres are represented by a special symbol on the map.

While no numbers exist for the total amount of civilian casualties, well-documented cases of 1164 deaths (by 21 February) indicate that: 7% of the dead are women, and 93% are men, in line with a frequently transpiring intention to “eradicate Tigray fighters, as well as the future generation of fighters”. Among the men, 7% are priests and deacons, traditionally people with authority in their community. All age groups are represented among the victims, in line with the population pyramid. Casualties are dominantly (27%) victims of massacres or killing sprees; 7% point-blank executions, in house searches, rounding up of civilians, or after arrest (including journalist Dawit Kebede). Though impressive in video footage, only 3% of the known victims were killed during shelling and airstrikes. 54% is killed by violence that has not been further detailed – most of them can be allocated in the massacre and executions categories. For the women, deceased victims of sexual violence may not be well documented.

Perpetrators comprised Amhara militia (7%), Eritrean (49%) and Ethiopian soldiers (11%) – with an additional 10% mentioning “either Ethiopian or Eritrean soldiers, they jointly carried out the killings”. In 23% of the cases, the affiliation of the perpetrator was not provided.