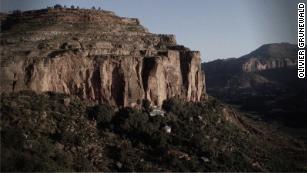 They thought they’d be safe at a church. Then the soldiers arrived

Editor’s Note: (All of the witnesses to this massacre have been given pseudonyms at their request due to fears of retribution.)

Abraham began burying the bodies in the morning and didn’t stop until nightfall.
The corpses, some dressed in white church robes drenched in blood, were scattered in arid fields, scrubby farmlands and a dry riverbed. Others had been shot on their doorsteps with their hands bound with belts. Among the dead were priests, old men, women, entire families and a group of more than 20 Sunday school children, some as young as 14, according to eyewitnesses, parents and their teacher.
Abraham recognized some of the children immediately. They were from his town in Ethiopia’s northern Tigray region, Edaga Hamus, and had also fled fighting there two weeks earlier. As clashes raged, Abraham and his family, along with hundreds of other displaced people, escaped to Dengelat, a nearby village in a craggy valley ringed by steep, rust-colored cliffs. They sought shelter at Maryam Dengelat, a historic monastery complex famed for a centuries-old, rock-hewn church.
How a religious festival turned into a massacre 08:29
On November 30, they were joined by scores of religious pilgrims for the Orthodox festival of Tsion Maryam, an annual feast to mark the day Ethiopians believe the Ark of the Covenant was brought to the country from Jerusalem. The holy day was a welcome respite from weeks of violence, but it would not last.
A group of Eritrean soldiers opened fire on Maryam Dengelat church while hundreds of congregants were celebrating mass, eyewitnesses say. People tried to flee on foot, scrambling up cliff paths to neighboring villages. The troops followed, spraying the mountainside with bullets.
A CNN investigation drawing on interviews with 12 eyewitnesses, more than 20 relatives of the survivors and photographic evidence sheds light on what happened next.
The soldiers went door to door, dragging people from their homes. Mothers were forced to tie up their sons. A pregnant woman was shot, her husband killed. Some of the survivors hid under the bodies of the dead.
The mayhem continued for three days, with soldiers slaughtering local residents, displaced people and pilgrims. Finally, on December 2, the soldiers allowed informal burials to take place, but threatened to kill anyone they saw mourning. Abraham volunteered.
Footage obtained by CNN shows the shoes of some of those killed in Dengelat. Credit: Obtained by CNN
Under their watchful eyes, he held back tears as he sorted through the bodies of children and teenagers, collecting identity cards from pockets and making meticulous notes about their clothing or hairstyle. Some were completely unrecognizable, having been shot in the face, Abraham said.
Then he covered their bodies with earth and thorny tree branches, praying that they wouldn’t be washed away, or carried off by prowling hyenas and circling vultures. Finally he placed their shoes on top of the burial mounds, so he could return with their parents to identify them.
One was Yohannes Yosef, who was just 15.
“Their hands were tied … young children … we saw them everywhere. There was an elderly man who had been killed on the road, an 80-something-year-old man. And the young kids they killed on the street in the open. I’ve never seen a massacre like this and I don’t want to [again],” Abraham said.
“We only survived by the grace of God.”
Abraham said he buried more than 50 people that day, but estimates more than 100 died in the assault.
They’re among thousands of civilians believed to have been killed since November, when Ethiopian Prime Minister Abiy Ahmed, who was awarded the Nobel Peace Prize in 2019 for resolving a long-running conflict with neighboring Eritrea, launched a major military operation against the political party that governs the Tigray region. He accused the Tigray People’s Liberation Front (TPLF), which ruled Ethiopia for nearly three decades before Abiy took office in 2018, of attacking a government military base and trying to steal weapons. The TPLF denies the claim.
The conflict is the culmination of escalating tensions between the two sides, and the most dire of several recent ethno-nationalist clashes in Africa’s second-most populous country.
After seizing control of Tigray’s main cities in late November, Abiy declared victory and maintained that no civilians were harmed in the offensive. Abiy has also denied that soldiers from Eritrea crossed into Tigray to support Ethiopian forces.
But the fighting has raged on in rural and mountainous areas where the TPLF and its armed supporters are reportedly hiding out, resisting Abiy’s drive to consolidate power. The violence has spilled over into local communities, catching civilians in the crossfire and triggering what the United Nations refugee agency has called the worst flight of refugees from the region in two decades.
The UN special adviser on genocide preventionsaid in early February that the organization had received multiple reports of “extrajudicial killings, sexual violence, looting, mass executions and impeded humanitarian access.”
Many of those abuses have been blamed on Eritrean soldiers, whose presence on the ground suggests that Abiy’s much-lauded peace deal with Eritrean President Isaias Afwerki set the stage for the two sides to wage war against the TPLF — their mutual enemy.
The US State Department, in a statement to CNN, called for Eritrean forces to be “withdrawn from Tigray immediately,” citing credible reports of their involvement in “deeply troubling conduct.” In response to CNN’s findings, the spokesperson said “reports of a massacre at Maryam Dengelat are gravely concerning and demand an independent investigation.”
Ethiopia responded to CNN’s request for comment with a statement that did not directly address the attack in Dengelat. The government said it would “continue bringing all perpetrators to justice following thorough investigations into alleged crimes in the region,” but gave no details about those investigations.

“… most of them were eaten by vultures before they got buried, it was horrible” Tedros

Abraham shared photos and videos of the grave sites, which CNN geolocated to Dengelat with the help of satellite image analysis from several experts. The analysis was unable to conclusively identify individual graves, which witnesses said were shallow, but one expert said there were signs that parts of the landscape had changed.
The initial bloodshed was followed by a period of two tense weeks, Abraham said. Soldiers stayed in the area in several encampments, stealing cars, burning crops and killing livestock before eventually moving on.
Tedros, who was born in Dengelat and traveled there after the soldiers had left, said that the village smelled of death and that vultures were circling over the mountains, a sign that there may be more bodies left uncounted there.
“Some of them were also killed in the far fields while they were trying to escape and most of them were eaten by vultures before they got buried, it was horrible. [The soldiers] tied them and killed them in front of their doors, and they shot them in the head just to save bullets,” he said.
Tedros visited the burial grounds described by eyewitnesses and said he saw cracks in the church walls where artillery hit. In interviews with villagers and family members, he compiled a death toll of more than 70 people.
The families hope that the names of their loved ones, which Tedros, Abraham and others risked their lives to record, will eventually be read out at a traditional funeral ceremony at the Maryam Dengelat church — rare closure in an ongoing conflict.
Three months after the massacre, the graves in Dengelat are a daily reminder of the bloodshed for the survivors who remain in the village. But it has not yet been safe enough to rebury the bodies of those who died, and that reality is weighing on them.
Correction: An on-screen title in an earlier version of the video in this story misstated the date of CNN-obtained footage from Tigray. It was filmed in 2021.

Jennifer Hansler contributed to this report from Washington, DC.