The meetings currently under way in the South Sudanese capital, Juba and the Sudanese capital, Khartoum could shape the future of the region. The question is this: are we seeing the emergence of two rival camps?

Or can they find a way to heal the wounds without giving up their critical objectives?

Abiy and Isaias in Juba

Rashid Abdi, one of the shrewdest commentators on the Horn, had this to say about the meeting in Juba.

“PM Abiy flew to Asmara to meet Afewerki on 4 March – first time two met since start of Tigray war. Two then travelled to Juba together.

Readout: Top priority for 2 ways to respond to growing calls for Eritrean troop pullout. US wants to see pullout in days, not weeks.

If the talks between Salva Kiir, Abiy and Isaias make progress, then this would put President Kiir in a strong position.

Kiir could find allies to head off pressure for South Sudan to end its endemic corruption and bring about a semblance of democracy in his beleaguered country, from the international community. 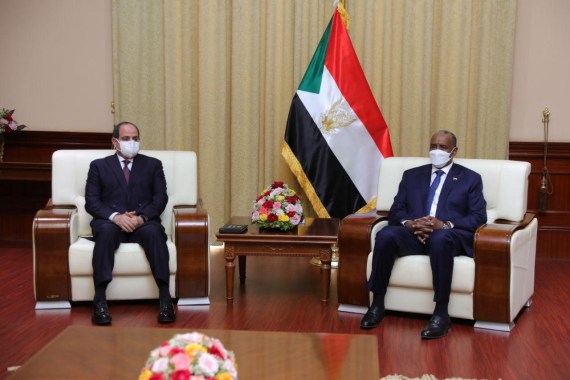 While Eritrea, Ethiopia and South Sudan meet in Juba, another meeting is under way in Khartoum.

Arab News reports that Egyptian President, Abdel Fattah-al Sisi, will hold talks with the Sudanese about the region.

“Spokesman for Egyptian Presidency Bassem Rady said al-Sisi’s visit to Sudan comes ‘as a consolidation of Egypt’s efforts under the leadership of the president to support Sudan and its brotherly people during the current important historical stage the [country] is going through.’

The visit will witness discussions on the most important regional and continental issues developments, it added, ‘especially the issue of the Renaissance Dam, security in the Red Sea, and developments on the Sudanese borders.’”

What is at stake?

For Eritrea and Ethiopia the key issue is the war in Tigray.

Both are under intense American Pressure for Eritrean troops to pull out of Ethiopia to try and bring the war to an end.

As the New York Times reported, Secretary of State Antony J. Blinken on Tuesday pressed the leader of Ethiopia to end hostilities in the northern Tigray region, citing a “growing number of credible reports of atrocities and human rights violations and abuses.”

In a phone call with Prime Minister Abiy Ahmed, Mr. Blinken pushed for Ethiopia to withdraw outside forces from Tigray, and for an immediate end to the violence, according to a State Department spokesman, Ned Price.

Pressure for action is rising at the United Nations, and tougher measures were only blocked because the Chinese and Russians were prepared to exercise their veto in the Security Council.

But the leaders know that further action is likely to be coming.

Ethiopia is trying hard to distance itself from its Eritrean allies.

As The Reporter said: “Ethiopia did not invite Eritrean troops to engage in Tigray region during the government’s law enforcement operation, the Ministry of Foreign Affairs stated.

In a weekly presser, spokesperson of the Ministry, Dina Mufti told journalists that ‘No official military agreement exists between the two countries. We have not made an official invitation for Eritrean troops to be involved in Tigray region,’ he said.”

This may be the official position of the Ethiopian Foreign Ministry, but at the moment the fates of PM Abiy and President Isaias are intertwined. Can the Prime Minister extricate himself? This is far from clear.

For Sudan and Egypt the key issues are the Grand Renaissance Dam (GERD) on the Nile and the the al-Fasaga triangle.

There has been a troops buildup on both sides of the Sudanese-Ethiopian border with reports that Eritrean troops are bolstering the Ethiopian forces.

Tensions are high, with reports of clashes.

Both sides have a great deal at stake. Sudanese have sworn never to relinquish the rich farm-land.

Amhara farmers were displaced by the Sudanese after Ethiopian troops were withdrawn in October last year to join the fighting in Tigray.

But PM Abiy is dependent on the Amhara militia who attacked south-western Tigray and hold large areas that were previously under Tigrayan control, although there is a report that they may be withdrawing.

Amhara support is vital if Abiy is to win the Ethiopian elections planned for later this year.

For Egypt the filling of the GERD dam is critical to its water supplies.

The Sudanese and Egyptian Foreign Ministers issued a joint press statement this week in which they stressed that Ethiopia’s possible second-phase filling of the Nile dam unilaterally would pose a direct threat to the water security of Egypt and Sudan.

Cairo and Khartoum hope to reach a binding diplomatic solution on water usage mediated by the US, EU, UN, and African Union.

Rashid Abdi reports that Ethiopia is said to be willing to make major concessions on GERD to Sudan and Egypt.

“In return, it wants support to fend off US, Western pressure on Tigray. Cairo, Khartoum need a deal, end to Ethiopian unilateralism, but they deeply distrust Abiy & Afewerki.”

In summary: critical meetings are now taking place in Juba and Khartoum. Both camps have much at stake in these talks.

Is is really possible that the complex and interlinked issues of the GERD dam, al-Fashaga triangle and the Tigray war could begin to be resolved this weekend?

It is worthwhile remembering that ties between Eritrea and the former South Sudanese rebels of the SPLA have deep roots.

In 1998 they came close to capturing Khartoum and overthrowing the Sudanese government in an operation funded by the CIA.

This conflict is admirably summarised in the Royal African Society’s publication, African Arguments. Two articles by Ahmed Hassan, which can be found  here and here, show how Eritrea and Ethiopia worked with Sudanese opposition movements to try to outs the Sudanese government.  As Ahmed Hassan argues, it was an alliance Eritrea and Ethiopia forged with the Sudan Alliance Forces (SAF) that did the fighting. They were backed by Ugandan troops and American money, in the form of CIA subventions.

The allies were attempting to outs the National Islamic Front (NIF) that had come to power in Khartoum in June 1989. Eritrea broke relations with Sudan in December 1994, and Sudanese rebels of the SPLA/M moved to Asmara officially in 1995 and were based in the building that had served as the Sudanese Embassy just few months previously. Tension between Eritrea and Sudan stemmed primarily from traded accusations that both Sudan and Eritrea were supporting opposition groups of the other country, and Islamist expansionism in Khartoum.

As Ahmed Hassan argues: “Most importantly, Sudan was viewed at that time by Eritrea, Ethiopia, and the U.S. as a destabilizing factor within the region posing serious threats with its adoption of a political Islamic agenda and the subsequent support to Islamic militants from Eritrea, Ethiopia, and Somalia. That period also marked honeymoon of the relations between the U.S. and the ‘new breed’ of African leaders represented by Isseyas Afewerki, Meles Zenawi and Yoweri Museveni.” Hence the American support.

The war came close to succeeding – at one time threatening Khartoum’s power supply from the Nile. But in the end the Sudanese opposition fragmented. Internal conflicts and a lack of success on the battlefield led to deep divisions. As Ahmed Hassan suggests: “By early 1998, SAF reached its limit as an effective movement due to the limited capacity and narrow agenda of its leadership. Serious internal conflicts between the military and the civilian components of the movement started to surface.”

Then – out of the blue (apparently) – the May 1998 border war erupted between Eritrea and Ethiopia. Both nations moved to mend fences with the Khartoum government and their support for Sudanese rebel movements melted away. For Eritrea the war with Sudan was over: the border war with Ethiopia had just begun.

In Support of His Holiness Abune Matias, Patriarch of the Ethiopian Orthodox Church, Archbishop of Axum, and Ichege of the See of Saint Taklehaimanot

What lies behind the war in Tigray?