The conflict in Tigray, the northern region of Ethiopia, has mostly been unfolding under a media blackout since early November 2020. Thousands of civilians have likely died as a result of the crisis.

They were sobbing silently, waiting for their turn at the end of a dark corridor — a dozen petrified women, seeking medical check-ups in Adigrat’s hospital after having been raped. None of them was willing to utter more than a few words.

Every day, Eritrean soldiers come to take medical equipment. Patients and doctors are terrified. “They come here every day, even two times per day,” explained a general practitioner, who wished to remain anonymous. “Yesterday, they stole a stretcher. When they come, not only the patients, but also the staff run away. The treatments get interrupted.”

Since fighting erupted in the Tigray region in early November, the public hospital in Adrigrat has received over 174 rape survivors. But there are fears many more could be trapped in villages.

“These [cases] are only those who have access to this hospital, but we don’t know what happens in the 18 districts in the Eastern [Tigray] zone – what happens to the mothers, what happens to the other community [members].” The doctor said women are being gang-raped, drugged and gravely injured in the assaults. One woman was held captive for over ten days, raped by 23 Eritrean soldiers, then left on the side of the road. Surgeons had to remove stones and nails that had been inserted inside her genitals.

In the hospital’s wards, the foul smell of wounds lies heavy in the stuffy air. Here, about 95% of the beds are occupied by civilians injured in the conflict. Some have lost limbs. One woman described how four of her children died as their home was shelled.

Adigrat is one of many towns affected by the conflict in Tigray, Ethiopia’s northern region, which is home to more than six million people.

Hostilities started when government troops entered the region after the Tigray People’s Liberation Front (TPLF), the ruling party in the region, attacked the army’s Northern Command. According to the TPLF, the attack was meant to preempt a planned military strike by the government on the region, although there is a lack of clear evidence for this.

In addition to the Ethiopian National Defense Forces and the TPLF, Amhara special forces and militia, as well as Eritrean troops entered the armed conflict in November. They are fighting alongside Ethiopian federal troops, against forces affiliated to the TPLF.

The government declared victory and the end of hostilities at the end of November, but clashes are ongoing in several areas. Ethiopian authorities insist the fighting is “sporadic” and that the interim government has been established successfully in most districts.

But on the ground, residents and NGOs tell a different story, one of daily battles and attacks.

Visiting the rural areas, where the alleged fighting is taking place, is difficult because of the unstable situation. Local translators working with foreign media have been arrested and intimidated, though witness testimonies give an impression of what is happening.

On March 2, residents told DW that a battle was unfolding a few kilometers west of Adigrat, saying sounds of heavy fighting could be heard in the villages. According to two eyewitnesses, Eritrean soldiers later entered the town of Azeba about 30 kilometers (less than 20 miles) from Adigrat and opened fire on civilians on market day. 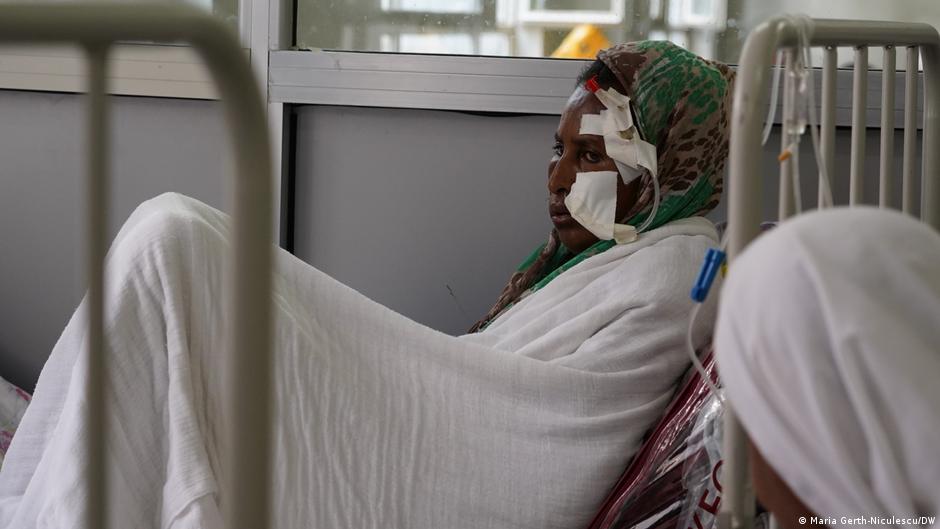 Emebet survived the attack, running for her life after hearing the first gunshots. When she returned to pick up her belongings, the ground was littered with dead bodies. “There was no way to pass through,” she recalled, wiping her tears with a traditional white scarf. A man who was also able to escape confirmed the scene.

Similar massacres against civilians are being increasingly documented. Both Amnesty International and Human Rights Watch confirmed that several hundred men were murdered by Eritrean soldiers in the town of Axum last November.

Civilians from Mekele as well as Central and Northern Tigray interviewed by DW say both Ethiopian and Eritrean defense forces were behind the killings and rapes.

But the UN statement indicated that “serious violations of international law, possibly amounting to war crimes and crimes against humanity, may have been committed by multiple actors in the conflict, including: the Ethiopian National Defence Forces, the Tigray People’s Liberation Front, Eritrean armed forces, and Amhara Regional Forces and affiliated militia.” In the town of Mai Kadra in Western Tigray, testimonies revealed that both Amhara and Tigrayan residents were massacred by Tigrayan and Amhara militias respectively.

In the face of the violence, more than half a million people have already fled their homes, taking refuge in cities such as Shire or the regional capital Mekele, where at least eight schools were transformed into displacement camps.

The Ethiopian government maintains that it has distributed food items to 3.8 million people and spent 1.87 billion Ethiopian Birr ($46.5 million) on humanitarian assistance in Tigray.

For weeks, international organizations and NGOs were not allowed into the region,worsening the humanitarian crisis both in Mekele and beyond.

A member of the interim administration in Adigrat, who was taking part in food distribution for displaced communities, also confirmed that the quantities of aid were not meeting needs.

To bridge the gap, locals have stepped up to distribute flour, pasta, clothes and mattresses. Especially in Mekele, some have been working voluntarily since the start of the conflict to organize distributions.

Mahlet, a young woman who recently finished her studies, has been collecting and buying food for the camps and hospitals. She is especially worried about the lack of balanced food for children. “I’m really mortified by what’s going on in my country. It’s very sad to see children be like this,” she said. UNICEF has warned that 2.3 million children in Tigray need humanitarian assistance.

“We used to be in a good position, to tell you the truth, we were not like this,” Mahlet remembered. “They are using hunger as a weapon.”

Mahlet’s anger is shared by many residents in Mekele. With telecommunications shut down and media access blocked for months, they were desperate to tell their stories when a few international journalists were given access to the region.

Most people do not recognize the current interim administration as their own. In September, Tigray held regional elections deemed illegal by the government. The TPLF won most of the votes, although the National Electoral Board didn’t recognize the result.

Tigrayan opposition parties initially accused the TPLF of rigging the election. But now they also refuse to accept the current regional government appointed by Prime Minister Abiy Ahmed, head of the Prosperity Party, the result of a merger of several other parties in 2019. Observers say the TPLF’s refusal to join the Prosperity Party led to the current conflict in Tigray.

“The mandate to oust the TPLF is for the people of Tigray. The people of Tigray elected their leaders, so we don’t need a government that is controlled by Addis. It is imposed on the people of Tigray,” said Hayalu Godefay, chairman of the Salsay Woyane party, which had supported Ethiopia’s current federalist system. Now, it firmly stands for Tigray’s independence.

Many feel the government abandoned them and are now in favor of independence. They see its silence as a sign of complicity with the massacres perpetrated by Eritrean forces.

“We want the Eritrean troops to immediately leave Tigray. We want all the crimes to be investigated by an independent organization,” said a 29-year-old resident of Mekele who asked to remain anonymous, fearing reprisal.

Asked about his response to the accusations, Tigray’s interim President Mulu Nega insisted TPLF leaders are the root cause of the current crisis and the presence of Eritrean troops.

“The northern command was attacked, it was guarding the people and the borders, so without having this force it’s difficult to always complain,” he insisted. “There is [now] no force that guards the Tigray people, so anything can happen.”

He added, however, that “any force should withdraw from Tigray” and said the government was working on strengthening its police force to bring all perpetrators to justice.

But Haftom Niguse, a former policeman from Abi Adi who was displaced to Mekele, has given up any hope of justice. He says Ethiopian soldiers killed 45 people in one day, and showed his own injuries from being beaten.

“Tigrayans are being slaughtered like animals. There is no justice, and no law,” he said.

As a response, many young Tigrayans have left their towns to join the armed resistance in the bushes.

Ethiopia’s Foreign Ministry has restated the “conclusion of the law enforcement operation” and urged the international community to support reconstruction efforts in the region. But rebuilding the Ethiopian identity of Tigray’s population will likely be the biggest challenge ahead

8 facts you may not know about Emperor Yohannes IV