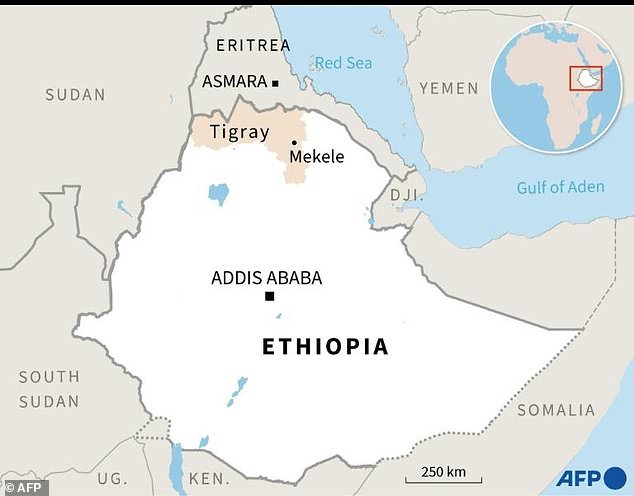 Eritrea, one of the world’s most repressive and secretive states, has played a major role in a military operation that Ethiopia launched last year against the dissident leaders of its northern Tigray region.

Soldiers from Eritrea, which borders Tigray, have been accused by residents and rights groups of massacres in several locations that figure among the worst atrocities recorded in the conflict.

Eritrea is a bitter enemy of the Tigray People’s Liberation Front (TPLF) — the party which dominated Ethiopian politics for nearly three decades before falling by the wayside with the appointment of Abiy Ahmed as prime minister in 2018.

However the current leaders of Eritrea and the TPLF were not always foes.

In 1991 they were allies when a coalition of Ethiopian fighters led by the TPLF ousted dictator Mengistu Hailemariam with the key support of separatist rebels from Eritrea — then still a part of Ethiopia.

Eritrea gained its independence in 1993, rendering Ethiopia landlocked as it lost access to its crucial Red Sea ports.

Relations between the two rapidly deteriorated over territorial and economic disputes.

In May 1998, Asmara and Addis Ababa went to war over the disputed town of Badme, a conflict that would be marked by trench warfare and large-scale pitched battles.

A peace deal signed in December 2000 put an end to the war which left 80,000 dead and instilled deep distrust and enmity between the leaders of the two countries as the issue of Badme remained unresolved.

Abiy’s appointment in 2018 led to a spectacular and unexpected about-turn in relations between Addis Ababa and Asmara.

He had risen through the ranks of the EPRDF governing coalition, in place since 1991, to become the first premier from the country’s largest ethnic group, the Oromos.

His appointment came after Oromos and Amharas, the second largest ethnic group, led several years of anti-government protests over their perceived marginalisation, which pushed former premier Hailemariam Desalegn to resign.

Abiy, who embarked on a series of democratic and economic reforms, announced in June 2018 that he wanted to end the border dispute with Eritrea.

Within weeks he and Eritrea’s President Isaias Afwerki signed a declaration putting an end to the war.

The rapprochement, which won Abiy the Nobel Peace Prize in 2019, placed the powerful TPLF in a difficult position with their enemy to the north now allied with Addis Ababa, with whom tensions had been brewing.

Abiy had begun to sideline the Tigrayan elites whom he saw as a main obstacle to his reforms, and they retreated to their stronghold in Tigray.

The TPLF refused to join Abiy’s new ruling Prosperity Party after he dissolved the EPRDF coalition, and held its own elections in defiance of a national postponement due to the coronavirus pandemic.

After Abiy launched his military operation to oust the TPLF, widespread reports emerged that Eritrean troops were in the region.

Even the new local authorities appointed by Abiy have admitted they are there and demanded they leave the country.

However Addis Ababa and Asmara continue to deny their presence.

Amnesty International said Eritrean troops had killed hundreds in the town of Axum, while AFP spoke to residents of the village of Dengolat, where the church counted 164 dead.

Roland Marchal, an expert from the Centre for International Research in Paris, said Eritreans were taking advantage by “occupying territory they see as theirs and by forcefully repatriating Eritrean refugees who they have always seen as a potential threat.”

Before the conflict, Tigray was home to almost 100,000 Eritrean refugees who had fled the authoritarian country and its system of forced military service.

The Hitsats and Shimelba camps have been reported by the UN and other sources to have been destroyed in the fighting.

“When you look at what they are doing in Eritrea there is a sense of collective punishment,” he said.

“They are busy settling a series of what they see as historic defiances by massacring the civilian population.”