Active hostilities continued to be reported across Tigray Region, and the humanitarian situation remains of deep concern.  Aid workers have described  a deliberate and widespread targeting of health-care facilities in the Region, which is having a devastating impact on the people, especially those in rural areas.  At least 12 health facilities were looted by armed actors in the past two weeks, according to the Emergency Coordination Centre (ECC) meeting on 12 March. Preliminary results from a rapid nutrition assessment conducted early March in various areas in Tigray indicate that among screened children under age 5, there was a very high proportion of children affected by acute malnutrition. In all areas assessed across six woredas, the proportion of Global Acute Malnutrition based on Mid-Upper Arm Circumference exceeded the emergency thresholds. The UNICEF Executive Director, on 19 March, stressed that as families continue to flee for their lives, parties to the conflict must ensure that children are protected from harm at all times and that basic service outlets, such as health centers, must be protected.

The number of newly displaced people across the Region continued to increase, with at least 1,000 people arriving daily in Shire, according to partners on the ground. The majority of the displaced have reportedly fled from Western Tigray to Shire, Adigrat, Axum and Shiraro, with an additional influx recorded from parts of North Western and Central zones, where they are reportedly being expelled by armed actors. While it is currently not possible to identify the full scale of the displacement, the regional government Early Warning Response department reports that more than 140,000 people have been displaced from Western Tigray Zone since the Amhara occupation.

Shelter Cluster partners have raised concerns over the poor living conditions for displaced people in Adwa, Axum, Shire and Abi-Adi, where up to 60 people are reportedly staying per single classroom. Further, while some people are taking shelter in overcrowded schools, churches and among host communities, many are forced to stay in open air, exposing women and girls to gender-based violence (GBV), in addition to other health and protection-related concerns. Aid workers stress that the lack of shelter is especially concerning given the upcoming rainy season, which threatens to aggravate the plight of many displaced people already exposed to inadequate conditions. The assessment team highlighted that the situation in Abi-Adi is particularly concerning, given that people have been displaced multiple times due to recurrent episodes of fighting, while receiving very little assistance. Similarly, an estimated 107,000 displaced people who arrived in Adwa over the past four months have so far only received very limited humanitarian assistance of any kind.

The GBV prevalence in Tigray Region in areas affected by the conflict is reportedly high, with the ECC on 12 March reporting that there have been at least 516 self-reported GBV cases across the Region since the beginning of the conflict.  ECC notes that these reports are likely only “the tip of the iceberg”, while partners add that the young age of many victims and the level of violence is concerning. GBV risks in displacement settings are growing, with overcrowded conditions, insecurity and limited assistance exacerbating the vulnerability of people.

Beyond GBV, displaced people express serious concerns for their safety due to the presence of military elements who are reportedly interfering with people’s interactions with aid workers in some sites. According to partners on the ground, many displaced people are hiding the assistance they have received for fear of looting. Amid concerns about limited assistance, protection actors also received concerning reports of displaced people in host communities engaging in survival sex due to an inability to pay for their shelter.

In Western Tigray, amid reports of grave human rights violations and of forceful relocation of Tigrayan communities on ethnic grounds, partners on the ground indicate that several major towns are now empty of Tigrayan people, with new residents occupying vacated houses. The heavy presence of Amhara Special Forces along the Tekeze River and logistical challenges have restricted access to the Western Zone from the rest of the Region. Currently, access to Western Tigray is only possible through the Amhara Region. Similarly, parts of Tigray’s Southern Zone are only accessible through Amhara, with Amhara forces reportedly managing the security.

The growing needs in the Region now vastly exceed the preliminary response plan that was developed by the humanitarian community in the first weeks of the conflict in November 2020. However, partners are increasingly able to reach more people in need and to move more supplies and personnel into the Region. The 2021 Humanitarian Needs Overview launched by the humanitarian community on 5 March estimates that about 4.5 million people are currently in need of humanitarian assistance in Tigray. More than 3.5 million people are estimated to be in accessible and partially accessible areas who are in immediate need of life-saving assistance, of whom 1 million have been reached with complete food baskets and more than 631,500 with water. Over 1,160 metric tons of non-food humanitarian cargo has also been transported to Tigray. The humanitarian community will continue to update the needs as more assessments become possible in the Region.

The United States Secretary of State, on 18 March, announced that it is providing an additional nearly US$ 52 million, mostly on food assistance, to respond to the humanitarian crisis in Tigray. Further resources are urgently needed to increase the scale and scope of the response and ensure it is commensurate with needs

The conflict along the border between Sudan and Ethiopia remains active, with Sudanese Armed Forces and Ethiopian—including Amhara militias – and Eritrean forces deployed around Barkhat settlement in Greater Fashaga and clashes reported since early March.

The number of refugees arriving in Sudan has been low in the past weeks as many Ethiopian asylum seekers are reportedly blocked from crossing the border into Sudan by armed actors. UNHCR and partners are working with local authorities assisting nearly 62,000 people who are currently seeking refuge in the eastern Sudanese states of Kassala and Gederaf. Relocation from Hamdayet and Village 8 to Tunaybah camp is on hold after more than 41,000 people were relocated. Over 20,000 refugees in Hamdayet and Village 8 are living in proximity to various armed actors, raising protection concerns for safe asylum.

Following the transition in early March to a notification system for international staff travel to Tigray, the humanitarian community has stepped up their presence and activities in Tigray. The UN estimates that there are currently around 240 UN staff in Tigray, with hundreds more aid workers with international and national NGOs present across the Region. The new notification arrangement for humanitarian cargo movements is also speeding up the provision of assistance to those in need.

Humanitarian organizations continue to increase efforts to deploy additional international staff to support the scale up of operations and ensure protection-by-presence amid reports of ongoing atrocities against civilians. During the reporting period coordination presence has scaled up in Shire, while in Mekelle all Clusters have coordinators. Partners note the urgency to decentralize their presence and provide relief in areas that have not been previously reached to mitigate secondary displacements, which threaten to further increase people’s vulnerability.

In the past week, access to parts of Eastern Tigray Zone continued to improve as heavy fighting reportedly largely subsided, and partners reached at least four previously inaccessible woredas of Erob, Saesie, Tsaeda Emba and Atsibi. In Central Zone, access to Abi-Adi town and surrounding areas also improved, and partners were able to reach Kola Temben, Ahferom and Keyhe Tekli woredas. Abergele, Tanqua Melashe, Edaga Arbi, Endafelasi and Hahayle woredas, however, remain inaccessible. In North Western Tigray Zone, despite ongoing confrontations that continue to limit partners’ access to people in need, aid workers were able to access the former refugee camps of Hitsaats and Shimelba for the first time since the beginning of the conflict, confirming that all humanitarian facilities in the camps have been destroyed by parties to the conflict, and the camps are empty. More partners were also able to reach Sheraro without major difficulties. On the other hand, active hostilities intensified in South Eastern and Southern zones over the past week, limiting partners’ access to people in need. Despite ongoing clashes of varying degrees, the main road between Alamata, Mekelle and Shire remains accessible.

Partners across all Clusters continue to stress that the lack of communications in most of Tigray seriously undermines efforts to scale up the response and ensure principled humanitarian action. Since the beginning of the conflict, power has been available only intermittently in main towns. Last week, power was restored in Adigrat, Axum and Shire, although it remains unreliable, and some parts of Shire Town is now accessing water services. It is estimated that some 4.5 million people in rural areas have been without access to electricity, communications and other essential services for more than four months.

Amid the ongoing influx of new arrivals to main towns, such as Shire and Mekelle, government officials are reporting serious challenges in registering displaced people due to limited staffing and lack of IT equipment. This is particularly concerning given that distribution of food aid is currently limited to registered displaced people who are a very small fraction of the overall number of displaced people. In Shire, authorities are forming volunteers to increase registration capacity, and partners are engaging with local authorities to identify and prepare additional sites for displaced people, as well as to address protection concerns, including intimidation and threats by military actors on sites. Humanitarians are also providing, and working to scale up, critical assistance such as water services and emergency shelter support, to newly arrived people.

Considering plans to re-open schools in the Region, the Protection Cluster is working closely with Camp Coordination and Camp Management actors to support the planned relocation of displaced people from school compounds and ensure safe, dignified and informed relocations to adequate alternative sites. With the arrival of many new actors on the ground, the Protection Cluster is also working to strengthen the prevention of sexual exploitation and abuse (PSEA) component across the response by delivering trainings and distributing relevant materials, including on providing support to GBV survivors for non-specialized actors.

The Inter-Cluster Coordination Groups (ICCG) have been activated in Mekelle and Shire and are holding regular meetings. Clusters have mobilized sub-cluster coordinators to Mekelle as well as to Shire, and cluster meetings have started to take place. Meanwhile, the Interim Administration-led Tigray ECC continues to meet weekly with joint sector meetings with the humanitarian community and held its latest meeting on 12 March. 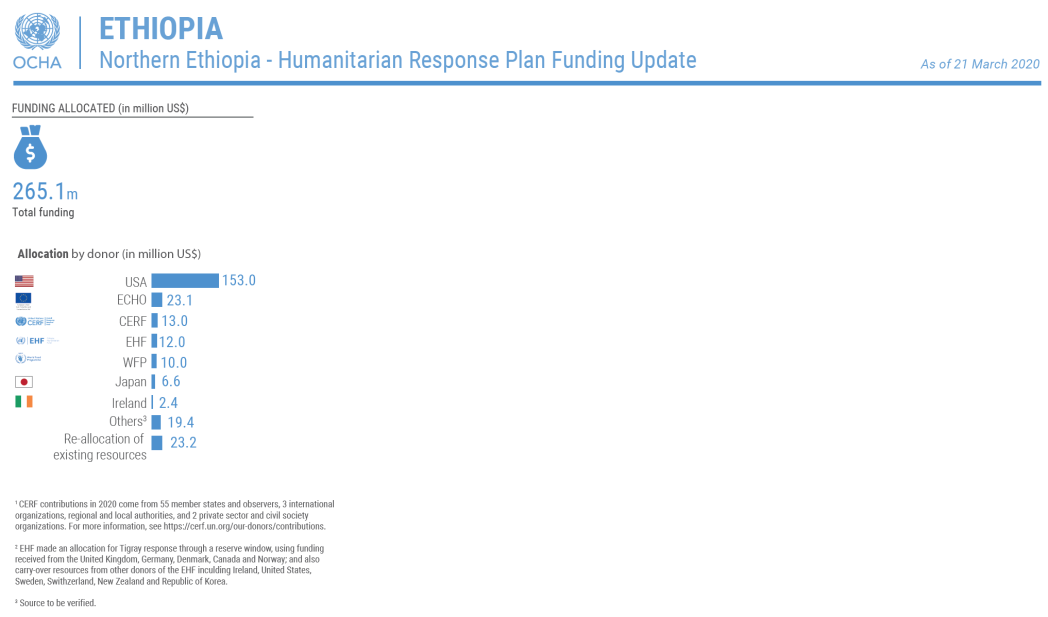