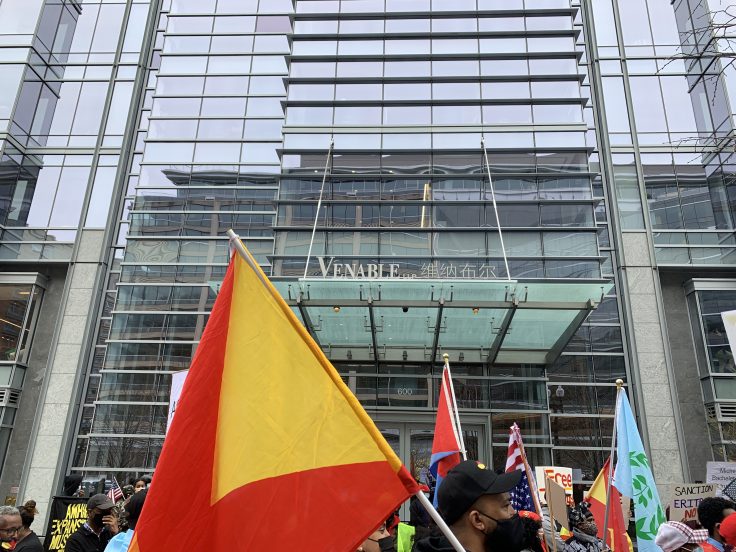 A prominent Washington, D.C., lobbying firm and major Democratic donor is partnering with the Ethiopian regime, which has been accused of war crimes in the country’s Tigray region, prompting a protest from Tigrayan advocates outside the firm’s doors on Thursday.

Venable LLP, a law firm with a political lobbying arm, struck a contract in February with the Ethiopian government running through the end of April. Venable also made major donations to several Democratic candidates in the 2020 election cycle and did contract work for the company of freshman senator Mark Kelly (D., Ariz.).

Venable has financial ties to several of the Biden administration’s senior leaders. According to publicly available financial disclosures, employees of the lobbying firm gave more than $200,000 to the Biden campaign, more than $33,000 to Vice President Kamala Harris, and $14,000 to Secretary of Transportation Pete Buttigieg.

Activist Meaza Gidey said the protesters are concerned about the Ethiopian government using Venable’s connections to lawmakers on Capitol Hill to soften the American response to the humanitarian crisis.

“We are concerned because they might have connections that they have built over the past years,” Gidey told the Washington Free Beacon. She said the firm could use those connections to “effectively convince American policymakers” to be more favorable to the Ethiopian regime.

In the 2020 campaign cycle, Venable and its employees donated a total of $339,200 to 132 Democratic lawmakers in Congress. The firm and its employees gave $114,707 to Republican candidates, less than 25 percent of its political donations. The firm’s influence also extends to prominent Senate Democrats. At least three lobbyists employed by Venable previously served on the staffs of Sens. Dick Durbin (D., Ill.), Chris Murphy (D., Conn.), and former senator Claire McCaskill (D., Mo.).

A spokesman for Kelly said the senator left World View Enterprises in February 2019, before the company’s contract with Venable.

Other protest organizers sounded the alarm about Venable’s influence and criticized the lobbying firm for taking on a government accused of war crimes as a client. Fedilla Kassa, an organizer of the protest, told the crowd in a speech that Ethiopian prime minister Abiy Ahmed’s government is using the firm to protect itself from accusations that it is conducting a genocide.

“The lawmakers who take money from these guys have a responsibility to investigate and hold these people accountable for being willing to tell lies on behalf of another government,” Millete Birhanemaskel, an organizer from Colorado who also has family in Tigray, said. “We want to hold them accountable as well.”

The protest is the latest in a series of demonstrations on behalf of Tigray. Activists have called on the Biden administration and lawmakers on the Senate Foreign Relations Committee to act to address violence and starvation in the region. Abiy admitted that Eritrean troops have entered Tigray after months of denying that Eritrean troops were involved in the conflict. He also acknowledged that sexual violence and other atrocities were occurring in the region.

Before he faced accusations of war crimes and genocide, Abiy was lauded by U.S. lawmakers and the international community as a democratic reformer who could be a model for other leaders. Rep. Karen Bass (D., Calif.) repeatedly praised the Ethiopian prime minister for “his commitment to peace and reconciliation in Ethiopia.”

On Wednesday, the Senate Foreign Relations Committee passed a bipartisan condemnation of the violence. The resolution, introduced by Sens. Jim Risch (R., Idaho) and Ben Cardin (D., Md.), called on all sides of the conflict “to cease all hostilities, protect human rights, allow unfettered humanitarian access, and cooperate with independent investigations of credible atrocity allegations pertaining to the conflict in the Tigray Region of Ethiopia.”

Activists said more is needed to avoid slaughter in the region. Daniel Woldu, a protest organizer who still has family members living in Tigray, called on the Biden administration to threaten sanctions against Ethiopia if violence does not cease.

“The U.S. can take an even heavier stance. You can sanction Ethiopia, you can sanction Eritrea. These two governments are causing havoc in the Horn of Africa right now,” Woldu said. “Take a decisive action where the government of Ethiopia understands that if you don’t abide by the human rights and international laws that are out there, you will be sanctioned and you will face the courts.”

Analysis: why ‘final’ offensive may not end Ethiopian conflict