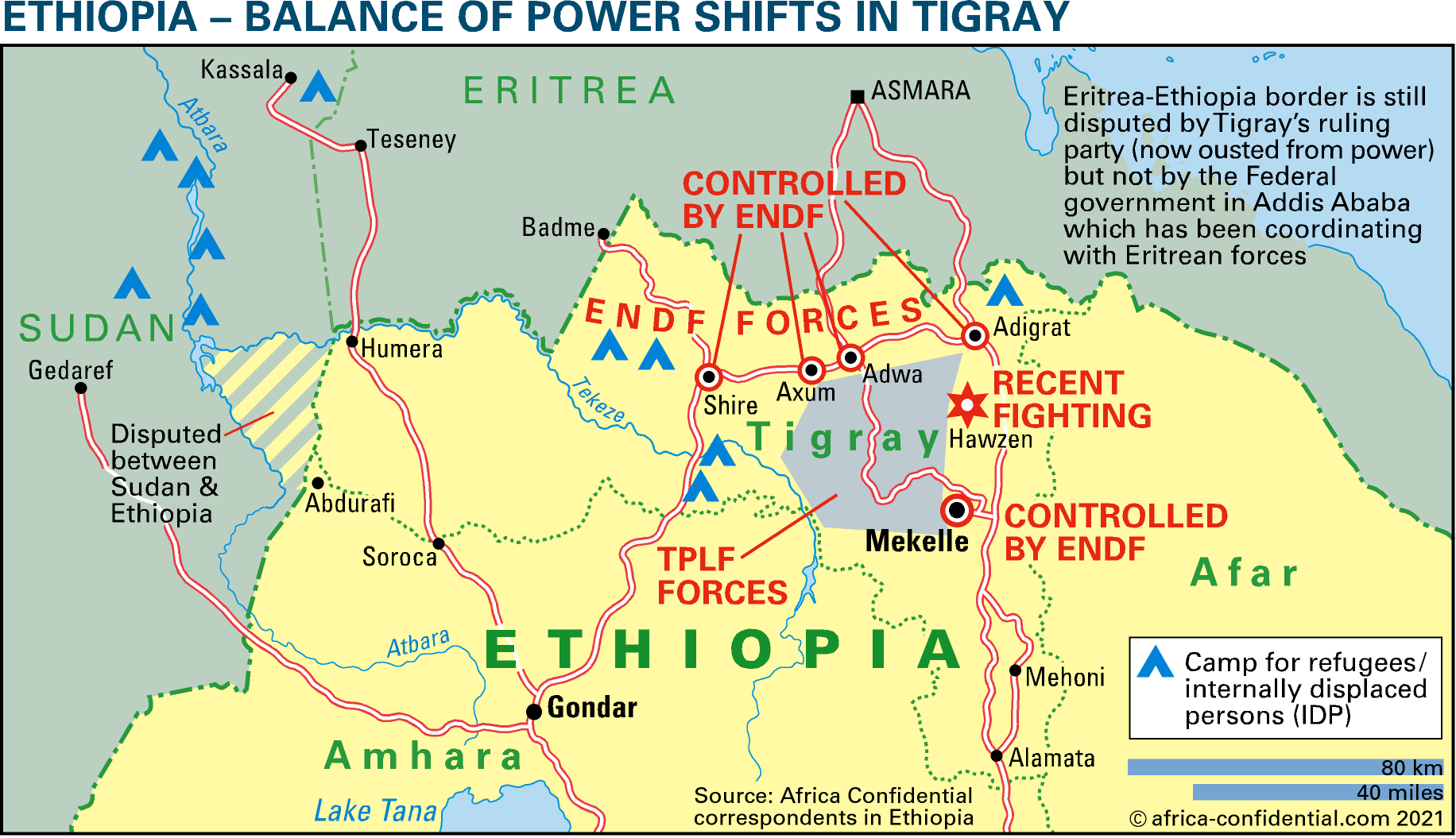 Efforts to float a trial balloon for greater closeness between Eritrea and Ethiopia by Ambassador Dina Mufti at his weekly press conference in Addis Ababa at the end of last month quickly crash-landed.

Talking about Eritrea’s Independence Day, 24 May, Mufti, who is spokesman for Ethiopia’s Ministry of Foreign Affairs, said, ‘Each and every Eritrean if asked would admit they don’t celebrate the day they separated from Ethiopia. They don’t like it.’ Ethiopians felt the same, he claimed. Ethiopia and Eritrea are one people. ‘Who would dislike it, if they are going to unite in a federation?’ he asked, as he sang the praises of economic and infrastructural integration followed by political integration. ‘It should be inevitable for all the countries of the region.’

Barely were the words out of his mouth when a storm of condemnation broke from all sides. Eritrea is gearing up for its 30th anniversary as a nation and even the United Statesembassy sprang to its defence, hailing its ‘hard-won struggle for independence’. Eritrean embassies and diaspora groups joined the chorus as the ministry hastily retreated and the ambassador ‘humbly apologised’.

Yet this faux pas was certainly signed off by the Foreign Minister, Demeke Mekonnen, who is also Prime Minister Abiy Ahmed‘s deputy. It betrays the deeper thinking at work in Addis Ababa and Asmara. This was simply a curtain-raiser that went wrong.

Abiy and President Issayas Afewerki have already created the Horn of Africa Council of Ethiopia, Eritrea and Somaliaand are looking to get South Sudan to join. The idea is to replace the Intergovernmental Authority on Development (IGAD), the premier regional body, with another more directly under their control (AC Vol 62 No 5, Stirring the regional pot).

One aspect of the unity idea is in de facto operation as Eritrean armed forces deepen their penetration of Tigray and look set to remain (see Feature, Eritrea entrenches in Tigray). Abiy and Issayas are preparing a defence agreement under which Eritrean and Ethiopian troops can operate under each other’s officers and in each other’s countries. This would make the Eritrean presence in Tigray legal, and so frustrate the international community’s demand for Asmara’s troops to leave.

Many suspect the roots of the moves towards unity lie in the still secret provisions of the peace accord Abiy and Issayas signed in July 2018 (AC Vol 59 No 14, From the edge of war to the bridge of love). At the time, Abiy described Addis Ababa as Issayas’s ‘own home’ while his counterpart said it was foolish ‘to assume we are two separate people’. This looks much less like flowery rhetoric now.

Abiy even told the World Economic Forum at Davos in January 2019 that there was no need to have different armies in Ethiopia, Eritrea, and Djibouti. Everything could be shared on the way to complete integration, he said. This has certainly long been on Issayas’s wishlist. He has long dreamed of federation and raised it first in 1993. The removal of his bête noire, the Tigrayan People’s Liberation Front (TPLF), leads him to believe his dream can become reality.

It’s in that light that analysts now look at Abiy’s creation of his Republican Guard unit, and the rebuilding of the air force in 2018-19. He introduced changes in training to try and remove Tigrayan influence, and expanded recruitment in 2019 and 2020. A purge of Tigrayans from the armed forces has accelerated in the past three years, and encompasses rank-and-file soldiers and police too. Since the war began in November, reports suggest, some 20,000 ex-Ethiopian National Defence Force (ENDF) Tigrayans and 7,000 police officers have been detained.

Defections and detentions, which have included Tigrayan troops serving in the African Union Mission in Somalia (Amisom) and in UN peacekeeping forces in South Sudan, have seriously damaged the army’s morale and capability. Abiy’s plans to merge the ‘Special Forces’ of Amhara and other regions into the ENDF may cause further difficulties.

President Mohamed Abdullah Mohamed ‘Farmajo’ is proving a weak link in the grand regional lash-up. He is in the midst of bitter disputes over his re-election and needs Ethiopian help. With so many Ethiopian troops having been redeployed to Tigray from Somalia, the activity of the Somali Islamist militia Al Shabaab has increased, and in Ethiopia too.

There are unconfirmed reports of Eritrean troops arriving in Mogadishu to help relieve Abiy’s manpower shortage. With or without Ethiopia, it seems Issayas is re-activating his 1990s interventionist policies, when Eritrea was involved in Congo-Kinshasa, Sudan and Chad, went to war with Yemen and Ethiopia, and carried out incursions into Djibouti. Until recently a pariah, he is now a major regional presence with a willing and powerful partner.