The head of the Ethiopian Orthodox Tewahedo Church has condemned his own country’s rulers in a video recorded by the director of a US-based charity, saying “they want to destroy the people of Tigray” with actions of “the highest brutality and cruelty.”

Abune Mathias, a native of the northern Tigray region who lived in exile for 30 years for criticizing the country’s then-communist regime, was filmed by Dennis Wadley, director of Bridges of Hope International over a month ago.

Wadley told CNN he took the video of Mathias in Addis Ababa, where the Patriarch is under what he described as “unofficial house arrest.” The charity director said he and his wife were in the country caring for refugees and internally displaced people at the time.

The video message represents the Patriarch’s first public comments on what he calls “Tigray’s genocide,” since the conflict there began. 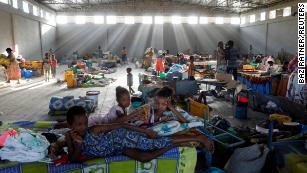 “What is happening is the carnage of people — particularly the killing of innocents. The youth are being searched out in towns and in villages. Then they have been killed and thrown off the cliffs. They are not even allowed to be buried, as for example in Mahibere Dego,” Mathias said.

“These type of atrocities have never been seen so far, which is very, very offensive. Particularly the rape of women is very disgraceful, shabby, and bad. They have no fear of God or any respect for human dignity,” Mathias added.


The Patriarch of the Ethiopian Orthodox Church, Abune Mathias looks on during a meeting with Russia’s then-Acting Foreign Minister Sergei Lavrov in Moscow in May 2018.

The Patriarch addressed his many thwarted attempts to speak out against the ongoing six month “carnage” in the Tigray region, which human rights activists fear could have claimed thousands of victims.

In the video message, Mathias urged world leaders to intervene and stop the violence.

Abune Mathias, center, addresses the public during the celebration of the eve of the Ethiopian Orthodox holiday of Meskel, in Addis Ababa, on September 26.

“The world governments must do something. It is urgent to decide to stop this evil action: the killing and massacre of innocents. They must stop, and the world should struggle to stop them,” he said.

The Patriarch said in the message he was unclear as to why Ethiopia wants to “declare genocide on the people of Tigray.”

“May God give you strength; be courageous; do not be demoralized; this bad season will pass away.” 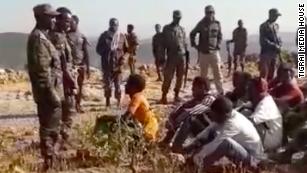 CNN has reached out to the Ethiopian government for comment on the Patriarch’s allegations but has yet to receive a response.

Just last month, after CNN confronted Ethiopia’s government with its own investigation on the deadly conflicts — which included videos of Ethiopian soldiers executing unarmed men in Mahibere Dego Tigray region — the office of Prime Minister Abiy Ahmed told the network an independent investigation would be undertaken.

The same statement added: “Social media posts and claims cannot be taken as evidence, regardless of whether Western media report it or not. Hence why investigations into allegations are welcome for remedial action and accountability. Resultantly the Ethiopian Human Rights Commission together with the UN Office for the High Commissioner of Human Rights are already in the pipeline to carry out investigations.”

The U.N. Must End the Horrors of Ethiopia’s Tigray War

Tigrai Will Win Against All the Odds!