At the top of a lighthouse in a deserted headland, Ali Hassan Ali points across the strait of Bab-el-Mandeb, to war-ravaged Yemen. Then, behind him, to war-torn Ethiopia. Then, to his right, at troubled Somalia. Finally, to his left at Eritrea, a dictatorship engaged in the Tigray conflict next door.

“This is a point of peace, of trade,” said the wiry man in charge of keeping the lights on. Djibouti, a former French colony home to just 1m people, is a rare point of stability in a highly strategic location, the southern end of the Red Sea, en route to the Suez Canal, a linchpin of global commerce.

About a third of all daily shipping in the world passes the north-east edge of Africa, where the water narrows to a chokepoint opposite Yemen.

With economic growth of up to 7 per cent forecast this year, double Africa’s average, according to the finance ministry, helped by hefty Chinese investment in ports, free trade zones and a railway line to landlocked Ethiopia, Djibouti is set to be one of the fastest-growing economies on the continent.

Home to five naval bases, including since 2017 China’s first overseas military base, its significance is geopolitical as well as economic. It is all about “location, location, location”, said Aboubaker Omar Hadi, chair of Djibouti Ports & Free Zones Authority and one of the most influential men in the country. 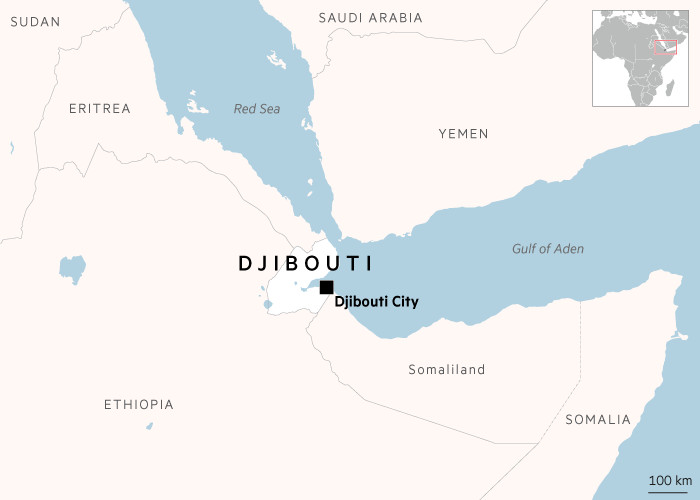 “It is both, location and stability,” stressed Nima Dirieh Warsama, chief executive of ATD-GIE, a transport industry group. Such stability is helped by French tanks, US helicopters, Chinese soldiers and Japanese vessels, which are a common sight because the area surrounding Djibouti is a “powder keg”, said a western military officer in the country.

Still, the government thrives in its role as neutral host to global powers, sometimes soothing tensions between Americans and Chinese, in what a senior government official called “a return to the cold war” where “Djibouti is absolutely an epicentre”. “What gives Djibouti this effervescence is the fact that the big powers are here, so it means it is safe,” the official added.

The French have trained 11,000 regional soldiers, mainly Djiboutian, and protect the country’s airspace with Mirage fighter jets. “We are really a guarantee of security here,” said Gen Stéphane Dupont, the commander of the base that hosts 1,500 French soldiers. Other powers, such as the US, agree. Djibouti is the backbone of a global coalition against al-Shabaab, an al-Qaeda-linked Somali terrorist group, as well as the now diminishing threat of piracy.

But for some, the arrival of China, which made $853m of investments between 2005 and 2019 and owns 30 per cent of Djibouti’s total debt, is unnerving. “It’s a tsunami, it’s really a tsunami,” said a senior western official in Djibouti, referring to Chinese presence ranging from investments to soldiers. “They are not an enemy, but they are not a friend either. And we have to live together.”

Djiboutian politicians, American contractors and French officials meet for soirées at the Café de la Gare to whisper about what the Chinese military may be doing at their concrete fortress. It safeguards merchant ships and holds a pier that could support China’s “aircraft carriers in the future”, the top US commander for Africa, Gen Stephen Townsend, recently said.

“Djibouti is located in a vital geostrategic region where all members of the international community have a vested interest,” said foreign minister Mahmoud Ali Youssouf. “We recognise that there is a serious economic competition between major powers,” he added but stressed his country is “not falling under any kind of sphere of influence”.

Indeed, said the country’s finance minister Ilyas Moussa Dawaleh: “It is truly false this idea that ​​China will take over Djibouti completely, it is a myth.”

Many agree that the atmosphere of the port city, where most of the population lives, resembles that of Casablanca, the film about intrigue and romance in the second world war. “Everybody snoops on each other,” quipped a senior foreign diplomat.

“We know very well that the Chinese want to spy. It doesn’t mean that we don’t do the same thing,” said a western military officer stationed in Djibouti. “We’re all friends here, but we all like to know what the other is doing.”

Democratic erosion or 99 per cent support?

Another key factor in the stability, many say, is 73-year-old President Ismail Omar Guelleh. He has run the country since 1999 and is widely described as a wily and savvy leader of what critics call a centralised autocracy.

“He’s the only game in town,” said a non-African diplomat. “There has been an erosion over time on the democratic front.”

Guelleh is credited with making Djibouti a base for both cargo shipments and foreign military. The size of the economy jumped from $536m when he took office to $3.3bn in 2019. His portrait is omnipresent in every shop, office and building. Last month, he won a fifth term with 99 per cent of the vote.

The main opposition rival, newcomer Zakaria Ismail Farah, said that “99 per cent has never happened in the world, except in a country of extreme dictatorship”. Foreign powers in Djibouti, he said, “have sacrificed the democracy of Djibouti for the sake of regional stability”.

Alexis Mohamed, a top adviser to the president, dismissed Farah’s criticisms, stressing that there are already discussions on the “political future of Djibouti” post-Guelleh as, legally, this is the president’s last term.

The president has “managed to preserve peace and social cohesion in Djibouti, in a region where there are tensions in Ethiopia and Somalia,” he said. “God has not given us oil,” he added, echoing Ali at the lighthouse, “but he has given us a strategic point.”

An earlier version of this story said that China had made $853bn of investments between 2005 and 2019. This has since been corrected to $853m.