One of the strikes hit a military command post and training center belonging to the Tigray People’s Liberation Front (TPLF) — the region’s ruling party — in the city of Mai Tsebri, according to Legese. 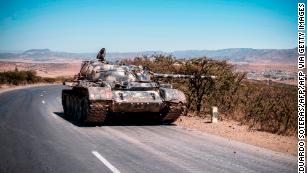 Ethiopia is at war with itself. Here’s what you need to know about the conflict
The strikes are part of Ethiopia’s Prime Minister Abiy Ahmed major offensive against the TPLF, which began last year. Thousands of civilians have since been killed, while more than 2 million have been displaced.
TPLF denied that the Ethiopian air force had hit military targets in Tigray on Sunday, and instead said the strikes targeted a hospital and a textile factory.
“Abiy Ahmed’s Air Force did target a local hospital in May Tsebri,” the spokesman for the TPLF Getachew Reda tweeted Sunday.
“Ironically, they also targeted what little is left of Almeda Textike in Adwa,” he wrote. “The textile factory had been totally destroyed by Ethio-Eritrean forces months ago.”
Getachew further contradicted Legese, saying “no military targets” were hit.
Communications are down across Tigray and it was not immediately possible to reach the TPLF, humanitarian sources or witnesses on the ground for comment. 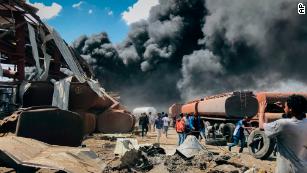 Mekelle struck, residents flee Amhara as Ethiopia battle intensifies
The Ethiopian air force has carried out seven air strikes in Tigray in the past week, and the United Nations said three children had been killed in an airstrike Monday.
The government — which faces accusations of war crimes — recently stepped up airstrikes in the Tigray capital of Mekelle after fighting escalated in the neighboring region of Amhara where the TPLF has seized territory.
The TPLF dominated Ethiopian politics for decades as the most powerful group in a multi-ethnic coalition, but the party has clashed with Abiy’s government after he came to power in 2018.
Abiy sent central government troops who drove the TPLF out of Mekelle late last year. But forces allied to the TPLF launched a counter-attack this year, recapturing Mekelle and nearly all of Tigray, and seizing swathes of Amhara.

US calls out genocide committed in 6 countries including Tigray